Even after making two loaves of delicious braided bread stuffed with my homemade spiced orange curd last week, I still had about a pint left of the orange curd that desperately needed to be used. So I went back to my pantry to see what I could dig up for a little kitchen experimentation.  Turns out I had: a box of cream cheese, an orange, a little bit of  honey goat cheese that I really needed to use up, a bit of honey greek yogurt left at the bottom of a container, a box of frozen puffed pastry (2 rolls) that had been in my freezer for at least a month, and some rough chopped pecans, lightly toasted.

Inspired a by last week's filling, and the memory of a puffed pastry pull apart pizza, I came up with the following recipe: 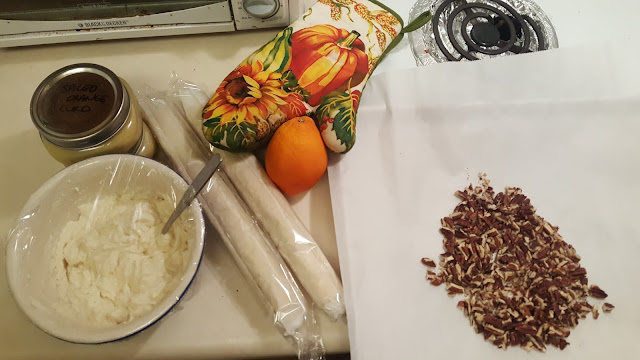 Set aside while puffed pastry defrosts (about 2 hours at room temperature).

I screwed up the thawing of the puffed pastry.  For one, I left it about 5 minutes over two hours and it was placed too close to the stove. This made the pastry really difficult to work with (as you can probably see by the pictures. 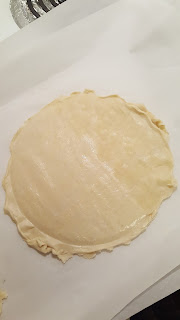 Carefully roll out puffed pastry, one sheet on top of the other and cut into equal circles. Keep leftover pastry dough for patching. Separate the circles and layer most of the cream cheese mixture, orange curd, and pecans. 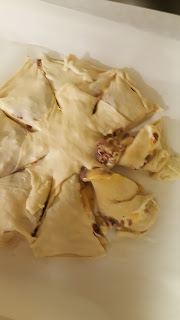 Add the second circle of pastry dough over the top and, leaving an uncut circle in the center, radiate slices as if cutting a pizza.  You can see from the picture that I had to patch up some breaks in the pastry dough.  Take each section and double twist. 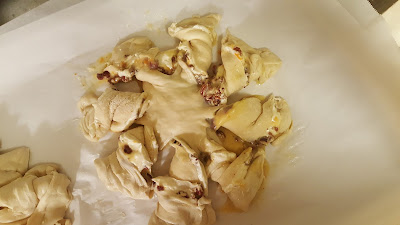 I had some extra dough and some extra cream cheese filling so I made something of a floral design with the dough in the center, put the rest of the cream cheese mixture on top, and arranged the orange pieces like so: 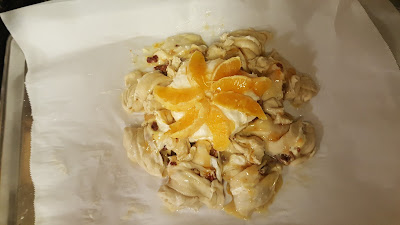 I had no eggs to make an egg wash, so I brushed the top with a little bit of coconut oil and drizzled it with honey.

Bake until the pastry is a darker golden brown, approximately 20 - 30 minutes. 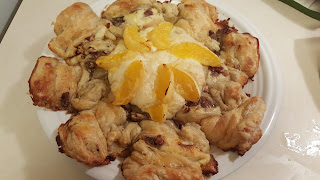 Results:
Even as the bread was baking I realized two things: the puff pastry was not nearly chilled enough when it went into the oven, and there was too much moisture and too much filling for it to bake properly. So my first suggestion is to CHILL THE DOUGH prior to putting in the oven and do not let it get too warm at any point during the preparation time. Second, I should have probably halved the amount of cream cheese filling I put in.

Because of the problems above, the center of pastry was underdone. However, flavor-wise it was good.
Posted by Dawn M. Keiser at 6:34 PM