After a week and a half vacation during which I got to spend a delightful few days wandering through the Wizarding World of Harry Potter, I am back and ready to blog. Also, I can't wait until I figure out a better formatting for this page. But that is a post for another time. Onward to the recipe.

A little background for this recipe, I have watched an inordinate amount of cooking and food channel shows in the past few years, including a delightful show called the Great British Bake Off.  A few months back I heard the term 'everlasting syllabub' and since I didn't know what it was, felt compelled to not only research it but put together my own spin the generally alcoholic dessert.

Instead of a drink, which is what a syllabub is depending on where you get your recipes from, I decided to make this more of a whipped cream and layer it with fresh strawberries and lemon curd. 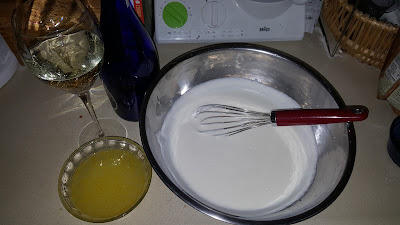 First I combined the juice and zest of 1 lemon with the sugar and wine, covered, and chilled while I whipped the cream to just before soft peaks formed.  Since my small electric hand mixer broke after too many batches of marshmallows, I used a whisk and did whipped the cream manually. It took a bit of time but it got the job done and allowed the other ingredients time to thoroughly chill.  At that point I added the lemon and wine mixture and continued to whip until soft peaks formed. Then I layered the cream with strawberries and dollops of lemon curd into large wine glasses and served.

Though I think next time I'm going to layer in angel food cake as well. 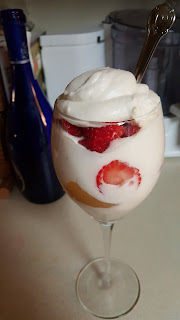