Some musings with my cake decorating

So when I started this blog, all of three months ago, I had some pretty lofty ideas of what I would write about: everything from esoteric musings to write-ups of the various projects I was working on. I was going to create a photo gallery of my travels, of my truly ridiculous hat collection, of my cat. Three months in and it's been mostly baking and cooking and food. Ah well.

So true to form, this update is of my latest forays into cake decorating. Cake one was pretty simple. These two were a tad more creative, and so much fun to do. 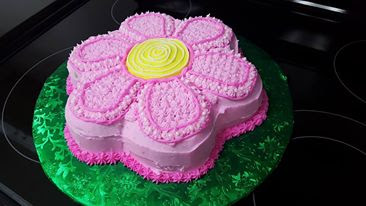 I did the Flower Cake as my second cake for the class I'm taking. It was still a little rough, especially if look real close, but it was so much fun to step back afterwards and realize that I did that with frosting. The cake was a basic white cake that I added two tablespoons of ginger to (1 fresh, 1 dried and ground).  Despite how much ginger I put in it didn't really taste as strong of ginger as I would have like.

My third cake was an ombre cake.   The sky blue coloring for the frosting made such beautiful pale blue rose-like swirls. I wish I had darkened up the mid and bottom levels, to make a more distinct color change, but it was otherwise awesome. 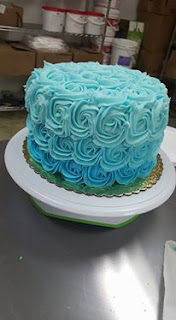 The cake itself was a champagne pear cake, though by the end the pear flavor was indiscernible. I used canned pears, and chopped them into the batter of a champagne cake.  While I couldn't taste them, the pears made the cake itself so moist. I filled the cake with a homemade champagne bavarian cream.

I will say that while gorgeous, this style of decorating meant there was a high ration of buttercream frosting to cake and filling, and at times felt a bit overpowering. That may just be because the cake and filling were very subtle flavors in comparison to the strong taste of the buttercream.