Cake decorating has taken off, as well as my academics and aerial training.  So this post is a little bit belated. I ended up baking three cakes for Mothers Day, 1 on commission and 2 for family - one for my sister in law and one for my own mother.

The commissioned cake was ordered the night before Mothers Day and all they wanted was chocolate upon chocolate. Straightforward enough, so to spruce it up a bit I cut the cake layers thin, so that the cake ended up being 7 layers of cake and 7 layers of filling, frosted with a chocolate buttercream filled with shaved chocolate.  This may not have been the infamous Death By Chocolate cake (as that takes 2 days to make) but it came pretty close. 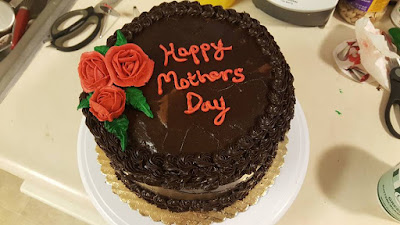 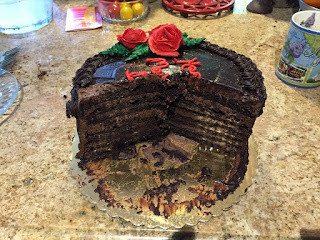 The picture to the right was taken by the cake recipients after they'd had a few pieces. Hmmmm. So many layers of chocolate. From all accounts it was pretty delicious!

The next cake I did was for my mother, and was also a round cake.  She requested lemon and vanilla flavors, so I made two cakes, one vanilla, and one my special lemon curd cake, filled the cake with alternating vanilla cream and lemon curd between each of the 4 layers, and frosted in a lemon whipped cream.  The decorations were buttercream because I still haven't found a good recipe for decorative frosting that doesn't lose shape over time. 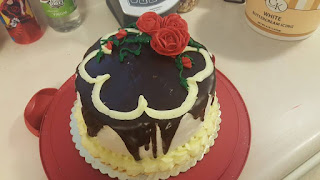 You can kind of see where I accidentally dropped my spatula into the chocolate glaze, but for the most part I think it turned out looking pretty good. From partaking in the cake later that day I know it tasted good. I'm going to have post my lemon curd cake recipe at some point because it never fails to be absolutely scrumptious.

The third cake I did for Mothers Day was a sheet cake for my sister in law who is also very pregnant with twins. She loves peanut butter and funfetti cakes, so I played around with a few healthier, from scratch recipes, and made my own vanilla funfetti cake with a peanut butter cream filling. 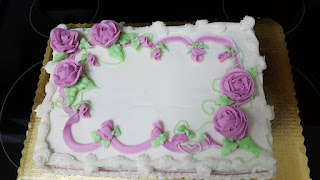 As you can see, my newly developed rose making skills were a theme this month.
Posted by Dawn M. Keiser at 2:49 AM