The latest from the Cake Files

I realized today that I haven't posted any of my cakes in a while. Last month I did two cakes decorated in fondant to look like gift boxes. 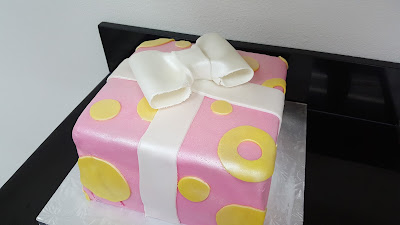 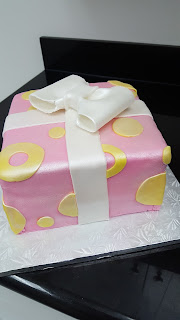 The first cake was a black pepper spice cake I got out of an old copy of The Spice Cookbook - 1964 that was given to me a few months back.  The cake was good, but not nearly as spicy as I wanted.  I think next time I make it I'll add a bit more cloves and fresh ground black pepper.  I filled the cake with coconut cream.

The bow was made with gum paste the week prior, and since I've been thinking a lot on the color yellow recently, I put yellow fondant polka dots over the main color fondant of pink.

The second cake I did was a two tier cake, the first tier being red velvet with a whipped cream filling, and the second tier was a funfetti cake (like the one I did for Mother's Day) with a dolce de leche filling.  Like the first cake, the bow was done out of gum paste and left to sit/harden for a week. I wrapped the base of each tier in a fake silver rhinestone ribbon.

As I was carrying this cake to the person whose birthday it was, a woman told me she loved my "hat."  Looking at the photos, I can kind of see it now, actually. At the time I thought it was really funny that I had made a cake that was mistaken for a fancy hat. 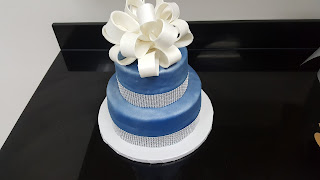 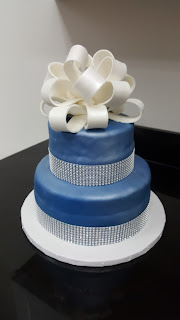